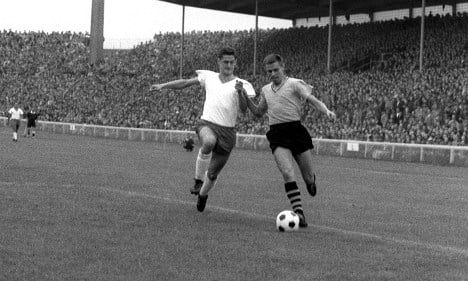 Konietzka, 73, was diagnosed with cancer of the gall bladder last month, according to Bild newspaper, which despite an operation, was deemed terminal.

Konietzka was the first footballer to score a goal in the then brand new Bundesliga, scoring for Borussia Dortmund on August 24, 1963. He went on to score 71 more goals in a further 99 Bundesliga games, and played for Germany nine times.

Konietzka’s second career, as trainer, was played out in Switzerland, where he lead Zurich to the semi-final of the European Championship after beating Liverpool in 1977.

His death notice is addressed to his friends. Konietzka says he wants to thank Exit which he says, “released me from my torture on Monday afternoon, and accompanied me on the difficult route.”

“I am very happy,” the notice says. He is only sad to leave his family, and urges people to make the best of their lives. “Mine was long but still so short,” he writes.

“Last Tuesday I was able to take Timo home from hospital,” his widow Claudia told Swiss newspaper Blick. “The last days were very, very beautiful. Timo was able to see his grandchildren again, and he even drank a beer.”

His assisted suicide will reopen the debate about euthanasia in Europe – coming as it does just as a paralysed man campaigning for the right to die in the UK was granted leave to have his case decided by the country’s high court.