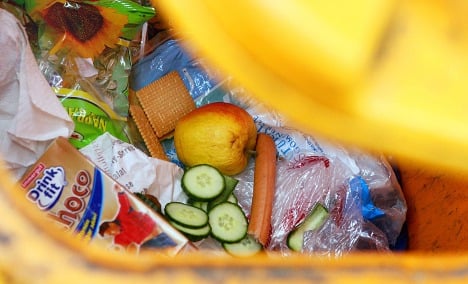 After conducting the first detailed investigation of its kind, Stuttgart University concluded each person in Germany is responsible for throwing away 81.6 kilos of food a year.

Nationally nearly 11 million tonnes of food is thrown out, just over 60 percent of which comes from private households, while a further 17 percent comes from large users such as restaurants, schools and canteens, and another 17 percent from industry. The remaining five percent of waste is accounted for by retailers.

The study, published on Tuesday in Die Welt newspaper, was the first to look at all stages of food handling. Other studies had resulted in wildly differing estimates of waste – between 6.5 million to 20 million tonnes.

The United Nations Food and Agriculture Organisation estimates that globally around 1.3 billion tonnes of food is thrown away each year – around a third of all food produced.

This situation prompted Cologne-based journalist Valentin Thurn to make his film “Taste the Waste” exposing the often cosmetic reasons for much food being thrown away.

The study did not include how much food lands on compost heaps, Die Welt points out, while some rejected food which is nonetheless cooked and served in restaurants was also excluded from the statistics.

Increasing awareness of the senseless waste of food has fuelled a small dumpster-diving movement, even in rule-abiding Germany. The supermarket’s practice of throwing out food when it reaches or even only approaches its sell-by or use-by date means lots of food ends up in bins which could safely be eaten.

Agriculture and Consumer Minister Ilse Aigner has called an experts conference for the end of March in Berlin to discuss how waste can be reduced. She will also talk with retailers about how to improve understanding of the dates printed on food packaging.