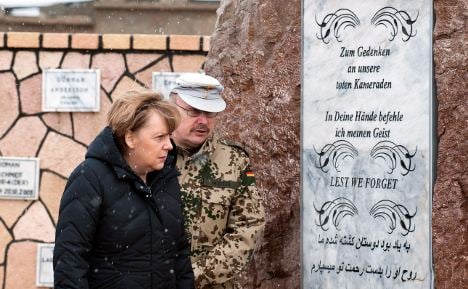 The point has not yet been reached where Germany can say “we can pull out today,” Merkel said as she visited troops stationed in Mazar-i-Sharif in the north of Afghanistan.

“And therefore, I can also not say that we will manage that by 2013/2014. The will is there, we want to do that and we are working towards that,” she said.

NATO said in January it was committed to withdrawing its combat troops from Afghanistan by the end of 2014.

Tensions were running high in Afghanistan as Merkel arrived following the rampage by the US soldier who killed 16 villagers including women and children in their homes in the Taliban heartland of Kandahar on Sunday.

In a telephone call to Afghan President Hamid Karzai, Merkel vowed that everything would be done to investigate what she called “the dreadful act of the US soldier”.

She expressed her personal condolences and those of the German people to Karzai for the outrage, DPA cited her spokesman Steffen Seibert as saying.

Merkel also congratulated Karzai for progress made in building up Afghan security forces while he in turn expressed gratitude for Germany’s commitment to peace in the country.

She also urged Kabul to push forward the political reconciliation process with armed groups like the Taliban.

The massacre in the Taliban stronghold in southern Afghanistan added to roiling anti-Western sentiment in the war-ravaged country over the burning of the Koran at a US base in last month.

Germany and several other NATO member states pulled their advisers from Afghan institutions after two members of the international force in Afghanistan were shot dead in violence over the Koran incident.

The Koran burning ignited days of violent anti-US protests in which some 40 people died, plunging relations between foreign forces and their Afghan allies to an all-time low.

Sunday’s killing spree came as the United States and Afghanistan pursue difficult talks on securing a strategic pact to govern their partnership once foreign combat troops leave Afghanistan in 2014.

The proposed accord would likely cover the legal status of any US troops remaining in Afghanistan to help Kabul with intelligence, air power and logistics in the fight against Taliban insurgents.

Merkel last visited Afghanistan in December 2010, to meet German soldiers just before Christmas. On that occasion she described the fighting there for the first time as “war”.

Germany is the third biggest supplier of troops to the 130,000-strong NATO-led International Security Assistance Force (ISAF) after the United States and Britain.

The German mission, the first major Bundeswehr deployment outside of Europe since World War II, has been consistently unpopular in the country.

Shortly after her arrival, Merkel paid homage to the more than 50 German soldiers killed in Afghanistan since NATO-led troops first went into the country in 2001.

Merkel had also wanted to visit neighbouring Kundus during her latest visit but had to abandon the idea due to heavy snowfall.