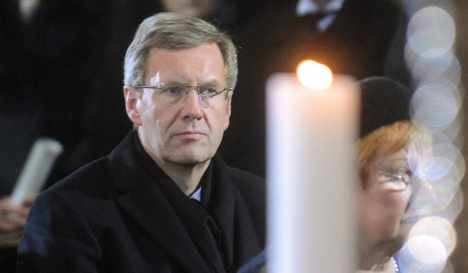 Wulff is said to have interrupted his stay at an unknown Catholic monastery for his farewell ceremony in Berlin last Thursday evening, which was marred by demonstrators blowing vuvuzela horns and the marked absence of 160 of the 390 invited guests.

Wulff is deeply religious and has long been active in the “Pro Christ” movement. In 2007, while state premier of Lower Saxony he travelled to Rome for a private audience with Pope Benedict XVI.

The former president has also used the time out to undergo a full health check, according to the report. On February 23, he was admitted to a Berlin military hospital with acute renal colic.

“We get visits from many people who are insecure and unsettled, or whose lives are going through a tremendous upheaval,” Father August Hülsmann of the Herz-Jesu Monastery in Neustadt an der Weinstraße in Rhineland-Palatinate told Bild am Sonntag.

Hülsmann said he reads the Bible with his guests, walks through the forest with them, talks and listens to them. He said that an increasing number of people were in need of this kind of healing.

Meanwhile, the political storm over the Wulff allegations goes on. On Sunday politicians from ruling and opposition parties called for the former president to refrain from claiming staff and office expenses.

German Foreign Minister Guido Westerwelle said the Wulff-bashing had gone too far. “You don’t kick a man when he’s down,” he told the Passauer Neue Presse on Saturday.