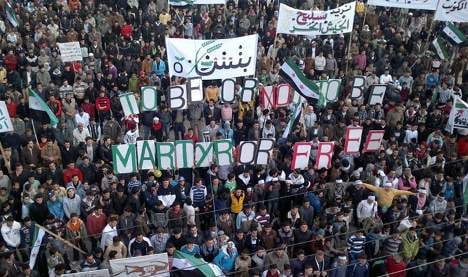 He said he would not send troops to Syria, where violent political unrest continues to rage following an uprising against the ruling regime and a savage crack-down on rebels.

“The disintegration of the Assad regime has started,” he said. “No country allows itself to be ruled with barbarism and repression in the long term.”

The US government, however, is debating whether to send troops to try to stop the violence – in support of the rebels.

Syria has been in revolt for nearly a year, but fighting has intensified over recent months while the country’s third largest city, Homs, has recently been subjected to a wave of violence by the army.

Last month the United Nations said at least 7,500 Syrian civilians had been killed so far, with at least 100 more, including many women and children being killed every day.

Abdo Hussameddin’s defection showed that Assad’s regime was starting to crumble, said Westerwelle. Not only were many other lower-ranking politicians already leaving the president’s side, but increasing numbers of soldiers were also fleeing the country, for neighbouring Turkey.

“We do not want to escalate the problem, but to dampen the inferno in Syria,” he said. Germany should look for a solution along the same lines of sanctions that have been imposed upon the country by the United Nations Security Council, he said.

Westerwelle said he would be at a United Nations meeting on Monday in New York to present Germany’s three main aims for Syria: humanitarian aid, an end to the prolonged violence and a peaceful change of government.