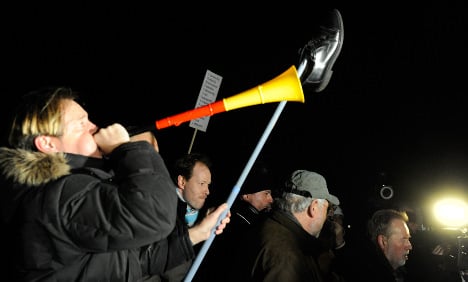 Some 250 demonstrators blowing the plastic horns that became famous during the 2010 World Cup in South Africa made their feelings loudly known as a military band battled to compete.

Wulff, for less than two years Germany’s youngest head of state, became embroiled in a quick-fire series of scandals played out in the media, culminating in prosecutors asking parliament to lift his immunity. He resigned last month.

Around 160 of the 369 invited guests stayed away in protest, according to mass circulation daily Bild.

Nevertheless, Chancellor Angela Merkel and most of the German cabinet attended the ceremony in the gardens of the sumptuous presidential palace.

In brief remarks, Wulff stressed the importance of Germany’s diversity and said he “would continue to be committed to our country and its people.”

President of the Bundesrat upper house of parliament, Horst Seehofer, said Wulff was “a good representative of modern Germany.”

Even the holding of the ceremony itself proved controversial, with opposition politicians calling on Wulff to forego the tradition due to the circumstances of his departure.

“Somebody who failed in office is having a farewell ceremony as if he did great things for Germany,” the head of the Social Democratic Party, Sigmar Gabriel, told local media.

Among the music played was “Over the Rainbow” from the movie “The Wizard of Oz” and Beethoven’s “Ode To Joy”, the anthem adopted by the European Union.

According to Bild’s online edition, the ex-president also considered “Ebony And Ivory” by Paul McCartney but it was deemed too difficult for the trumpets.

Wulff, a former premier of the state of Lower Saxony once seen as a possible challenger to Merkel, will have difficulty returning to national politics, according to a survey published ahead of the ceremony.

Some 73 percent of people said he could not make a comeback, according to the poll published Thursday by YouGov for Germany’s DPA news agency. Fifteen percent said he could again hold political office.

Nearly 80 percent said they would like to see the president, who is meant to act as the country’s moral compass, chosen by the people. Currently, the president is elected by a special body of MPs and dignitaries.

Wulff’s successor, Joachim Gauck, 72, an East German Lutheran pastor and human rights activist, is due to be elected on March 18 with the backing of all main political parties.

Wulff landed in hot water late last year when Bild reported he had failed to declare a home loan secured at an advantageous rate from a wealthy friend’s wife while Lower Saxony state premier.

A barrage of negative press coverage followed, largely over ties with wealthy businessmen, until prosecutors in Hanover, Lower Saxony, sought to lift his immunity to probe allegations he had enjoyed favours from a film producer friend.

He will receive an annual life pension of €199,000 ($262,000). The ceremony, which in its current form dates back to early 19th century Prussia, is held for departing German presidents, chancellors and defence ministers or high-ranking military figures.

Former Defence Minister Karl-Theodor zu Guttenberg was also honoured with the ceremony after resigning last year when his doctorate was rescinded for plagiarism.