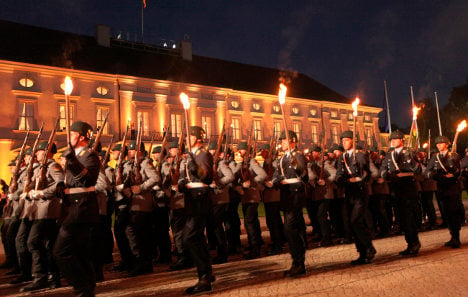 Nearly three weeks after resigning, Wulff, 52, will be officially waved off from the largely ceremonial job at a nationally televised evening “Ceremonial Tattoo” in the garden of the president’s sumptuous Bellevue Palace.

Officials have said that the ceremony will involve music from a military band chosen specifically by Wulff, including numbers such as “Over the Rainbow” from the movie “The Wizard of Oz” and Beethoven’s “Ode To Joy”, the anthem adopted by the European Union.

Wulff, who for less than two years was Germany’s youngest head of state, became embroiled in a quick-fire series of scandals played out in the media, culminating in prosecutors asking parliament to lift his immunity.

Whether the ceremony should go ahead has proven controversial with opposition politicians, who have called on Wulff to forego the tradition due to the circumstances of his departure.

“Somebody who failed in office is having a farewell ceremony as if he did great things for Germany,” the head of the Social Democratic Party, Sigmar Gabriel, told the daily Stuttgarter Nachrichten newspaper.

However, German Chancellor Angela Merkel, who chose Wulff as her candidate for president, and many of her ministers, will be present at the Grosser Zapfenstreich event.

The head of Germany’s Turkish community said he would also attend to honour Wulff’s moves to reach out to the Muslim community during his time as president when he stated that Islam was part of German life.

“I think it’s important that I thank him once again for his work, in the name of the Turkish community and in the name of all Turks in Germany,” Kenan Kolat told German radio.

The ceremony, which in its current form dates back to early 19th century

Prussia, is held for departing German presidents, chancellors and defence