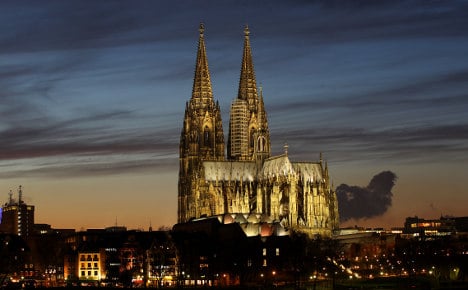 Bid on some art this weekend and help a cultural community in Africa grow. Patti Smith, Matthew Barney, Christo, Olafur Eliasson, and Wolfgang Tillmans are among the big names who donated works for the auction. Proceeds benefit “Opera Village Africa,” a village in Burkina Faso where art is integrated into most every facet of life.

Dancers rest on a rooftop. A woman plants rice. Soldiers smile for the camera. A new exhibition at Berlin’s Photography Museum presents 123 photographs of Japan from the first two decades after the second world war. A diverse range of images show how a new, modern nation emerged after the devastation of the atomic bomb.

Frog, Hedgehog, Rooster, and Mouse in a House

This 45-minute puppet show is in German, but Thomas Mierau’s colour shadow puppets are too cute to miss just because of a little language barrier. The puppeteer has been creating handmade marionettes, hand puppets, and shadow puppets for his little theatre since 1991. Bring your little ones aged four and up to get a look at Mierau’s colorful cast of characters.

Architecture of the 1950s Photography Walk

Discover the gems of Cologne’s 1950s architecture on a walking tour led by Lomography. Ten euros gets you the tour, a rental camera, and a roll of film. Architecture photography? Sounds like your new hobby. Get snapping.

There’s the power struggle, the resignation to the bossy wife, the blind eye ever so slightly turned. Oh the quirky characteristics of a marriage. Married life, specifically among the British middle class, is one of Sir Alan Ayckbourn’s favorite topics. One of England’s most successful living playwrights, he’s penned over 70 plays. See his 1973 living room drama Living Together this weekend in Frankfurt.

Every second Saturday of the month, Frankfurt’s Modern Art Museum invites young art lovers to go behind the scenes and get a deeper appreciation for art. This week, the group goes on a “blind date” with the artist Thomas Bayrle. Sign up your over 15-year-olds. They’ll love getting a private look at his art studio.

Back in 1996 Sun Valley won an honourable mention at the Berlin International Film Festival. Sixteen year’s later, He Ping’s “Chinese Western” is flickering across the big screen at the Confucius Institute in Hamburg. Succumb to scenes of China’s astonishing landscape Friday night.

Spring is in the air ladies! Well, maybe not really, but it will be soon. Time to freshen up those wintery wardrobes in time for the new season! Bring at least three gently used items from your closet to Hühnerposten Sunday where you can swap them for something fun and fantastic to kick off your new spring look. Go for the clothes, stay for the hair styling, massages, manicures, and drinks!

Leonardo DiCaprio called Urban Roots “an inspiring film about the emergence of urban farming in Detroit. If the “King of the World” liked it, well, so should you. See what’s happening on all those vacant plots of land in Motor City when the Mark MacInnis documentary screens Tuesday in Munich.

Comedy and suspense merge in Angelo Cianci’s 2010 film about life in the suburbs of Paris. Though it’s not your typical day you’ll see unfold in Top Floor, Left Wing. This humourous thriller recounts Francois’ unfortunate morning involving guns, drugs, and an eviction notice.

Split – An Evening of One Acts and Torn Identities

It’s always enriching to take in a new play. The Munich theatre company Impact is dedicated to presenting new English language theatre. This week, they’re staging a pair of one act plays by two accomplished playwrights. See “The Donahue Sisters,” by Irish playwright Geraldine Aron and “The Author’s Voice,” by American playwright Richard Greenberg, and spend an evening caught up in the stories of some very entertaining characters.

Location: Teamtheater Tankstelle, Am Einlass 2a