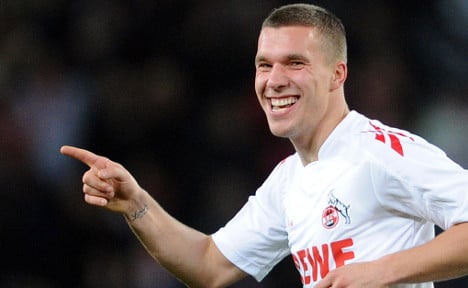 The German club, currently 14th in the Bundesliga, made no confirmation of the claim but Bild, which is generally well-informed, said he had agreed terms with the English Premier League side.

But his advisor Kon Schramm said on Thursday, “We are not commenting on this matter.”

Podolski, 26, will be paid an annual salary of some €7 million, the newspaper said.

The attacker was transferred in 2009 from Bayern Munich to Cologne, where he began his career.

Ahead of the deal, Podolski had been contacting fellow German national team member Per Mertesacker, who plays for Arsenal, asking for the low-down on current conditions at the club.

The injured centre-back told German Sky Sports News television, “He has been very interested in the last few weeks and sent me a text message or two.”

“I just responded to him positively; we have a good club here and everyone here has a positive opinion of ‘Poldi’.”

The 26-year-old has made 95 appearances for Germany, is a veteran of two World Cups and was part of the team which reached the Euro 2008 final when the Germans lost to Spain.

“Nothing is fixed yet and Podolski hasn’t actually rung me,” said Mertesacker, a Germany international who is currently recovering from an ankle ligament operation.

“I think things will happen now behind closed doors.”

Podolski has scored 16 goals in 20 German league games this season – more than half of his team’s total tally of 31.