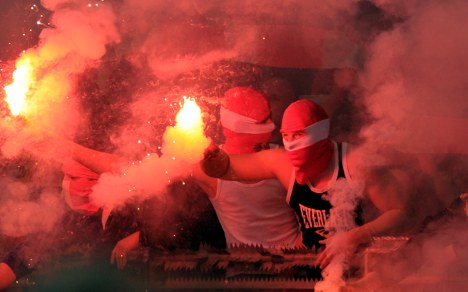 The bus was returning from Gladbach’s defeat to Nuremberg when it stopped at a service station on the A3 motorway in Rhineland-Palatinate, where some Cologne fans – returning from a draw with Hoffenheim – were also pulled up.

“When we got back on the motorway, a black Opel followed us, the driver was constantly talking on the phone,” the bus driver told Bild newspaper on Monday.

A few kilometres later, two white Mercedes vans manoeuvred in front and behind the bus, while another car drew up alongside. More cars followed. The vehicles forced the bus into another service station, near the town of Siegburg in North Rhine-Westphalia.

“Around 30 or 40 people jumped out of the cars, some of them masked,” the bus-driver said. “They smashed the bus’s windows and lights.” A lot of the Gladbach fans took shelter on the floor of the bus, but none were injured.

Paving stones were also thrown at the bus, which contained 38 fans, including women, youths and the elderly, who had paid €32 each for the trip.

The driver, who wants to remain anonymous, managed to escape by driving the bus through a gap in the gang. “I just thought: you have to get out of here with these people,” he told Bild.

Police later stopped a van full of Cologne fans, but arrested no-one. A police spokesman called the incident, which resulted in an estimated €26,000 worth of damage, “a life-endangering attack.”

“We are investigating on charges of property damage, assault and breach of the peace,” he added.

Cologne football club is considering imposing stadium bans on the fans, if they are found. Mönchengladbach player Filip Daems described the hooligans as “total idiots.”

“It getting worse and worse. Where will it end?” he told Bild.