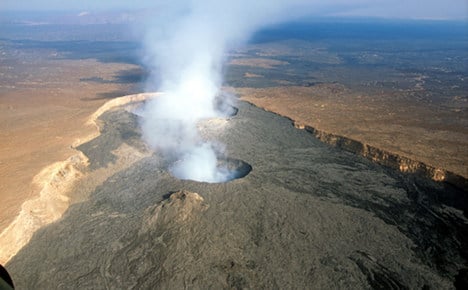 The two were handed over to German embassy officials and local elders in the desolate northern Ethiopian region on Monday, the Afar Revolutionary Democratic Unity Front (ARDUF) said in a statement.

They were seized in a bloody attack on the slopes of the famed Erta Ale volcano. Two other Germans, two Austrians and a Hungarian were killed in a gun battle between the rebels and government forces escorting the tourist group.

Since then, the Germans have been held in the harsh desert environment, one of the hottest places in the world.

In their statement, the rebels apologised to the unnamed pair and wished them a safe return home. Ethiopian officials were not immediately available for comment.

The rebels said the Ethiopian government had frustrated their earlier plans to free the Germans by making movement in the area “impossible.”

The Germans were among 22 tourists trekking on the slopes of Erta Ale volcano when the shootout erupted.

The incident dealt a blow to regional tourism, after tourists were were kidnapped in Kenyan resorts months earlier by Somali pirates.

Ethiopia says the rebels attacked the tourist convoy, but the ARDUF said fighting broke out when Ethiopian troops protecting the tourist party fired on one of its patrols and blamed Addis Ababa for the deaths.

“The five innocent European tourists were killed by Ethiopian fire,” added the statement.

Erta Ale, or “Smoking Mountain” sits in the Afar depression, also known as the Danakil depression, which lies below sea level and features as the dramatic backdrop to scenes in Hollywood’s 2010 epic fantasy “Clash of the Titans.”

Access to the region is limited and foreigners need official approval to get there but it attracts a steady stream of volcano buffs and adventure backpackers who often plan group trips on Internet forums to share the high travel costs.

Ethiopia has blamed arch-rival Eritrea for backing the rebels and claimed the tourists were held across the border in remote desert areas of Eritrea – charges Asmara fiercely denied.

Last month, ARDUF rebels said they supported the hostages’ safe release, but warned that “any military engagement with ARDUF would… endanger the lives of the two German citizens.”

It claimed there had been repeated clashes between Ethiopian forces and ARDUF rebels since the January attack.

ARDUF has been fighting a low-level insurgency in the northern region near the tense Eritrean border to end what it says is “political marginalisation and economic deprivation” by Addis Ababa. The group claims to have no links to Eritrea.

In 2007, ARDUF rebels seized five European tourists and eight Ethiopians. The Europeans were released after 12 days to the Eritrean government, while the Ethiopians were freed almost two months later.