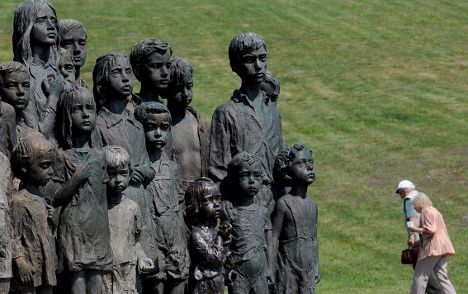 Local authorities said they organised the ceremony near Lake Resko, on Poland’s Baltic coast, to remember the 76 youngsters and four crew members who died on March 5, 1945.

The Dornier 24 aircraft and the bodies of the victims have remained in the lake since the end of the war, with amateur divers sometimes discovering personal items such as children’s drawings preserved in the mud.

But there are now plans to recover the remains and give them a decent burial, provided local authorities and a German foundation can raise the €150,000 ($198,000) needed.

The plane was involved in an air-bridge set up to try to evacuate civilians to the Baltic island of Rügen during Nazi Germany’s retreat in the face of a massive Soviet offensive.

As German troops were driven back, civilians fled in fear of reprisals by the Soviets and Poles, whose homelands had suffered a brutal Nazi occupation.

Much of present-day Poland’s Baltic coast was part of Germany until the victorious Allies shifted the borders after the war.

If the bodies can be raised from Lake Resko, they will be laid to rest in a cemetery in Szczecin, a city in northwest Poland near the German border.

Almost 67 years after the end of the war, over a million German soldiers and civilians from the Eastern Front and former German territory are still unaccounted for.

Efforts to resolve their fate were hampered by postwar tensions between West Germany and the Soviet-led communist bloc, of which Poland was a part.

But the fall of the Iron Curtain in 1989-1991 brought a thaw, opening the way for the restoration of German cemeteries and a renewed drive to locate long-lost burials.

War dead are discovered regularly in Poland – whether by historians or construction workers – and an official exhumation programme for Germans is governed by a 1991 accord between Warsaw and Berlin.

Since then, some 150,000 Germans have been reburied, the bulk of them soldiers.