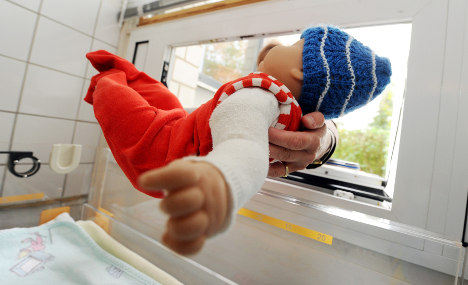 This is the key finding of a new survey by the German Youth Institute (DJI), which has prompted an angry reaction from several politicians. The DJI contacted 344 providers, including charities, churches, youth services and other services that offer to take babies anonymously.

The results found that 973 babies were given away anonymously between 1999 and May 2010, and that the providers no longer had records of around 20 percent of them. In other words, it remains unclear whether the babies were adopted or re-claimed by their mothers.

The DJI underlined that it was difficult to even find any exact figures on the number of abandoned babies. “This is because the data is not collected at a central office, and in some cases providers either have very little or no documentation whatsoever on the procedures,” the survey said.

Many of the providers work without any kind of cooperation contract, or sometimes just spoken agreements, with local youth welfare authorities.

Elkin Deligöz, deputy parliamentary leader for the Green Party, told the Welt am Sonntag newspaper that a standardized procedure had to be developed to deal with anonymous babies.

She said that all anonymous babies should be reported immediately to the local youth authority, that a state guardian should be appointed and the adoption procedure should be taken over by the state.

Christian Democratic Union politician Ingrid Fischbach went further, saying that people should not be allowed to give up babies anonymously at all. Instead, data should be kept secret for a few years, she told the Welt am Sonntag, so that they can be contacted later for counselling or offers of help.