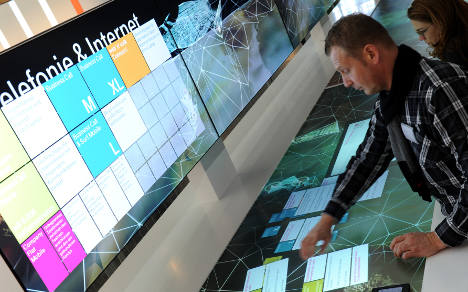 While CeBIT, held in Hannover, tends to focus on the business side of technology, it has been overshadowed recently by the gadget wizardry unveiled at other showcases in Las Vegas, Berlin or Barcelona.

“It’s not the attendance figures that count but the contracts which are signed,” Reinhold Umminger, vice-president of CeBIT’s organizing company, stressed, ahead of the March 6 – 9 fair in the northern German city.

But the internet with all its new possibilities looks set to muscle in on this year’s event with some big hi-tech names due to attend after having long skipped Hannover on the annual calendar of technology events.

South Korea’s Samsung, Japan’s Sharp are due to return. Microsoft, the IT giant which has just launched the test version of a new generation of its Windows operating system, Windows 8, will all also be represented.

And the business networking website Xing will attend for the first time. Google chief Eric Schmidt will deliver the official opening speech late Monday, alongside German Chancellor Angela Merkel, who will also address the fair, and Brazilian President Dilma Rousseff, whose country is guest of honour.

Schmidt may well use the occasion to promote Google+, the internet titan’s Facebook rival, after The Wall Street Journal recently commented that “Google+ is a virtual ghost town compared with Facebook.”

Among other likely highlights is new software that shows in real time what is causing excitement on the web by reflecting on screen the themes most discussed by 150 million sources including social networks.

Others include a virtual “eraser” for wiping out traces of potentially embarrassing mistakes on the Internet, a system for protecting smartphones from eavesdropping and a mobile device for asthmatics to assess the air quality.

Cloud computing, which allows social networks and companies to make use of files and applications based on the provider’s servers via the internet, rather than on their own servers, is again set to be a hot topic at CeBIT.

And against the backdrop of Germany’s mighty automobile industry, Audi will be showing off cars that boast an internet connection.

But CeBIT, above all, is about doing business, Umminger said which accounts for why it enjoys stable figures for both visitors and exhibitors. Some 80 percent of the 4,200 exhibitors are technology business representatives.

The rest is shared by exhibits devoted to technology for governments and other bodies of public administration, private individuals and a more futuristic area focused on research.

Under the banner “Managing Trust – Confidence and Security in the Digital World,” the fair will address concerns about lost or pirated data at both the private and professional levels.

“We debated for a long time over whether security was a sexy enough theme,” Umminger said. “And we concluded that yes (it was), because it concerns everyone.”