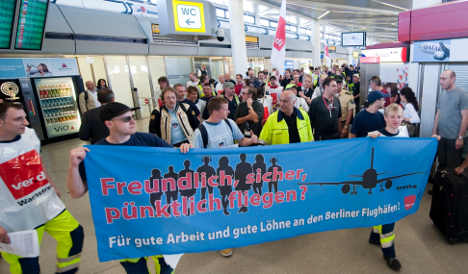 The public union, ver.di, called on the 1,500 ground workers at GlobeGround to stop working from 6 a.m. to 9:30 a.m in a push for a four percent pay increase.

About 200 early shift workers, accounting for about two-thirds of the shift’s ground worker personnel, walked off the job – a turnout Strike leader and ver.di negotiator Jens Gröger said the union was pleased with.

Of the 700 planes coming into and out of the airport, 30 had to be canceled, an airport spokesman told The Local. Domestic flights were mainly affected, he said.

The so-called ‘warning strike’ was announced just 15 minutes before it happened, so that airport management could not round up replacement workers in time.

Gröger said the strike’s purpose was not to incapacitate air traffic, but to send a warning signal to management of what is to come if they don’t compromise with the union.

Disruption on a larger scale has been ongoing in Frankfurt, where ground workers are fighting for a considerable pay increase and improved working conditions.

The Schönefeld Airport in the eastern part of the city is not affected.