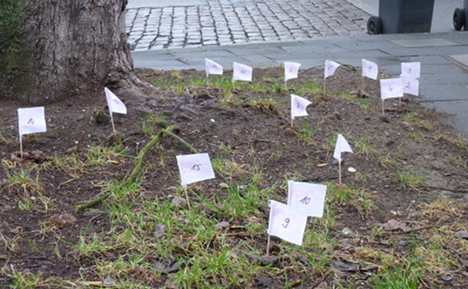 Artur Hahn and Benjamin Pidde tagged the piles of poop with tiny white flags numbered from one to 15. The action took place Monday and since word has spread like wildfire, Pidde told The Local.

“We didn’t do it to get publicity for our office or anything like that,” Pidde said, noting that he and Hahn specialise in shipping law and don’t take on cases involving civil neighborhood disputes.

“We did it to call attention to the problem.”

Pidde said he and Hahn are not dog haters. Hahn has a golden retriever and several employees in their office also have dogs. One lawyer even brought her dog to work daily.

But they got tired of clients coming into their office and having to wipe the poop off their shoes because careless owners didn’t remove the excrement from a small piece of lawn in front of the office.

Asked why Germans don’t pick up after their dogs, when they generally have a reputation of being orderly and clean, Pidde said, “I think it’s because of shame. They are ashamed to touch the excrement. They have to overcome this.”

Laws in many German cities, including Duisburg, require dog owners to pick up after their pets, but lax owners are not fined. Pidde said he is not in favor of fining dog owners, but wants them to realise what a mess their pets make and that they have to clean it up.

“People have to take responsibility for this,” he said.

The unusual action was successful. Since the flags went up there has been no additional poop left on the lawn.

People stop at the flagged area and take pictures and others have come into the law office to ask about the action.