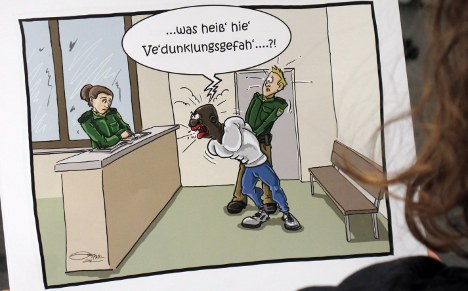 One cartoon shows a black man drawn with a flat head, exaggerated musculature and big red lips literally spitting as he is held in a police station by a slim blonde officer and shouts at another white officer.

The dark-skinned arrestee is asking: “What’s the danger of suppressing evidence here?” The supposed joke is a play on the German word for evidence suppression which is Verdunkelungsgefahr – or the danger of darkening something.

The calendar has presumably been hanging on police station walls for at least eight weeks – and on Thursday cops across Bavaria would have turned the page to March to find that offensive cartoon.

They have already had a month of looking at grotesque caricatures of two middle-Eastern with massive hooked noses, and another black man with huge red lips, representing the three wise men. They are being told by another normal looking pair of white Bavarian police officers that they must pick up the droppings of their camels. The black man is already on his knees doing so.

“The rules on green areas also apply for wise men from the East,” one of the cops is saying in the cartoon for January.

Wilhelm Schmidbauer, president of Munich’s police force has told his officers to remove the calendar, a spokesman told Die Welt daily paper. He is being joined by other police force heads across Bavaria in banning the calendar.

“It is about caricatures which could be misunderstood,” the spokesman said. “They are not allowed to be displayed in our stations any more in order to give out an unmistakable signal.”

The cartoons reflect a spirit which “is not compatible with the self-image of the Munich police,” Schmidbauer told Bavarian Radio.

But the Bavarian state division of the German Police Union (DPolG) has defended the calendar, 3,000 copies of which it published.

“For me the whole thing is impossible to understand,” said Hermann Benker, chairman of the union’s Bavaria division. “They are acting as if this police jargon does not exist.” The cartoons only poke fun at police jargon he said. “There is nothing behind it,” he insisted.

Other cartoons include one where a policeman is calling up to man threatening to kill himself, “Jump now finally you idiot, I have other things to do today.”

September’s picture shows a hearse having crashed into a car and the coffin having slid out of the back onto the road. One officer agrees with another when he suggests that it should count as a road traffic fatality for the statistics.

Benker said the calendar was only now being removed because the media had reported on it. “Until now it has not upset anyone,” he said.

He said he refused to be labelled a racist. He said one reason for arresting people was Verdunklungsgefahr, while the phrase “travelling black” was used for those without tickets, and Blindenpassagieren “blind passengers” for stowaways.