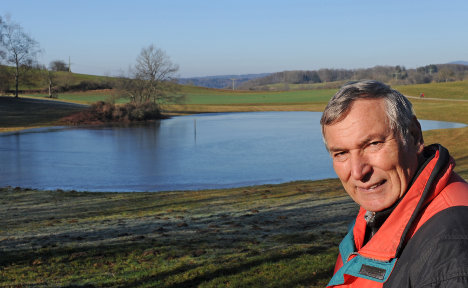 The Eichen Lake, a body of water which can be nothing more than a dent in the ground for years at a time before filling with water again for a few weeks or months, offers the rare conditions needed by an ancient branchiopod.

The lake, near Schopfheim close to the Swiss border, is a natural phenomenon, filling with water when the groundwater level becomes high enough from rain or melting snow. It has been full now for several days – to the delight of Hartmut Heise, a pensioner who lives nearby.

He observes the fresh water shrimp each time the lake fills with water. “Evolution produced these special shrimp 440 million years ago and since then they have barely changed,” he told Die Welt daily.

Heise, who is a volunteer nature warden in the area, said the small lake was the only place in Germany where the two-centimetre long shrimp were found – and that there were only seven other places in Europe where irregular lakes meant they could live.

“The animal adapted to its environment perfectly as to survive, the fertilised eggs first of all need around four weeks of water and then dryness. The dry phase can last two years or even longer, it doesn’t matter. Only when the Eichener Lake appears again and the eggs are in the water again do they develop further.”

The lake has been included in nature protection measures for 70 years. When full it is around 250 metres long and 130 wide, and up to 2.5 metres deep.