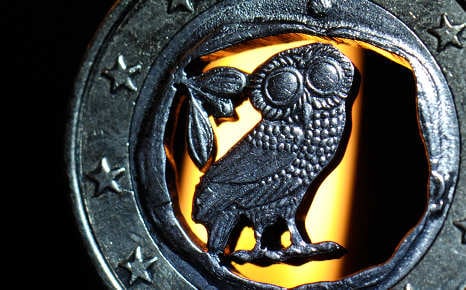 “Germany is not ready,” a eurozone governmental source told news agency AFP, of the latest move in a global tug-of-war over emergency bailout funding. “Chancellor Angela Merkel ultimately agrees that the funds, old and new, should be combined,” the source said. “But the timing isn’t yet right.”

Eurozone leaders were to meet Friday on the second day of a European Union summit to discuss combining the temporary European Financial Stability Facility rescue fund with the permanent European Stability Mechanism due to come into operation in July.

This would give the debt-wracked 17-nation zone total funds of about €750 billion ($1 trillion) with which to help weaker member states.

EU president Herman Van Rompuy decided Tuesday to delay the sensitive discussions in light of dogged resistance from Germany, the biggest contributor to the funds.

A source said a special summit of eurozone members might be held next month instead. “Don’t rule out a (eurozone) meeting before March ends.”

Ministers from the G20 group of developed and emerging economies pressed Europe at the weekend to come up with a substantial aid plan before they can consider providing the International Monetary Fund with additional resources.

There was meanwhile good news on the debt crisis from Italy and Portugal, with Rome able to raise more than €6.0 billion ($8.0 billion) at far lower interest rates while Lisbon passed an important EU-IMF audit of its reforms.

On the downside, the European Central Bank suspended acceptance of Greek government bonds as collateral for bank refinancing after the ratings agency Standard & Poor’s declared Greece to be in selective default.

The ECB added that any banks hit by its decision could still borrow cash from national central banks via an emergency liquidity assistance facility.

An ECB statement said Greek bonds could not be used by eurozone banks as collateral for central bank loans following an announcement by Standard and Poor’s that Greece was in “selective default” following a debt writedown.

S&P said, however, that its assessment could change following the writedown of privately held Greek bonds sometime around March 12.

The lower rates that Italy had to pay to raise its funds signalled that investors were less worried about the finances of the eurozone’s third biggest economy.

Severe pressure on Italy’s ability to fund its debt in December pushed the European Central Bank to flood the markets with cheap three-year funds in a move that eased pressure. The ECB is due of offer more of the same Wednesday.

The EU-IMF approval of Portuguese budget measures and reforms cleared the way for a new slice of rescue aid meanwhile even though Lisbon cut its economic forecasts again, with the economy now expected to shrink 3.3 percent, worse than the previous 3.0 percent.

Bailed-out Ireland meanwhile said Tuesday it will hold a constitutional referendum on the European Union’s proposed fiscal pact, part of measures aimed at preventing any repeat of the debt crisis.

The referendum will be watched closely by Ireland’s EU partners as Ireland has sent shockwaves through the bloc in the past by initially rejecting two key EU treaties before passing both in second votes.

At a summit in January, nearly all EU leaders backed a fiscal treaty that forces countries to enshrine in national law a so-called “golden rule” to balance budgets or face automatic sanctions, in the wake of the euro crisis.

British Prime Minister David Cameron refused to back the pact when it was first proposed and the Czech Republic has also said it will not sign up.

In Berlin, German finance minister Wolfgang Schäuble said Tuesday that it would be regrettable if a country decided to leave the eurozone or EU but that other members would have to accept it.

“If a country were to decide to leave them, it’s something we would regret but which it would be necessary to accept,” Schäuble told reporters.

He had been questioned in particular about Greece after German lawmakers on Monday endorsed a second, €130-billion rescue package from the eurozone

and IMF for Athens.