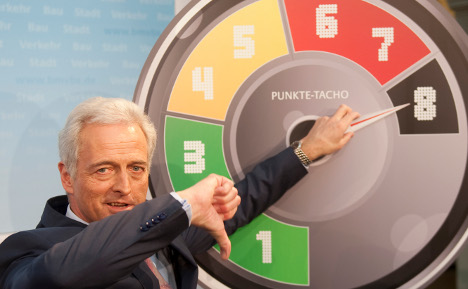 Careless drivers in Germany will still rack up points in Flensburg – the northern city where the country’s traffic authority is located. But they could now lose their licences more quickly after changes to how road violation points are calculated.

“We want to make the system simpler, fairer and more transparent,” said Ramsauer at a press conference in Berlin.

The minister presented his pet project with a giant “Point Tachometer” designed to grant motorists a visual representation of how close just a few points can bring them to losing their licences.

While one to three points is still in the green, four to five revs the needle up into yellow and gets you a warning from Flensburg. Six to seven hits red and triggers an invitation to an obligatory driving seminar. Anything over eight points pushes the tachometer into black and you can start buying bus tickets.

Scheduled to take effect in 2013, the reform would also remove the chances for drivers to reduce their violation points by taking remedial classes.

“There shouldn’t be a point rebate for traffic hooligans,” Ramsauer said.

The Transport Ministry estimates the changes will boost the number people losing their licences each year by 10 percent. But registered traffic offences will be limited to dangerous driving – so other things such as not having the right sticker for an urban environmental zone will no longer earn you a point.

And though it will take longer for points to be erased in Flensburg – drink driving points will last 10 instead of five years – each violation will have its own expiration date. Anyone currently with points on the record will have their offences automatically converted to the new system.

“There will be no general amnesty,” said Ramsauer, who must now work up draft legislation for parliament’s consideration.

The German motorist group ADAC has welcomed the reforms as long overdue, but a police union dismissed it as “political shadowboxing.”