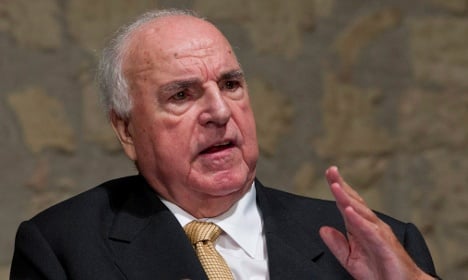 Writing in the Bild newspaper, Kohl, who is widely credited as one of the architects of united Germany and Europe’s single currency the euro, said: “The current discussion in Europe and the crisis-like situation in Greece cannot now lead us to lose the aim of a united Europe from view, or even to question it and pull back.”

He said the opposite was true. “We must use the crisis as a chance. We need – particularly now – more and not less Europe.”

He said the most important motivation of what he called Europe’s founding fathers – including in this Winston Churchill and Konrad Adenauer among others – was the desire to prevent further war. This remains valid, he said.

“Europe is our future. There is no alternative to Europe. We have every reason for optimism that we, that our Europe can also emerge from the current crisis stronger – if we want it. Let us not be led astray.”

Chancellor Angela Merkel had to rely on votes from the left-wing opposition Social Democratic Party for a parliamentary vote to endorse a multi-billion euro bailout for Greece on Monday evening.

She only garnered the votes of 304 of the 311 MPs in her centre-right coalition for the €130 billion rescue package which would only be paid if the Greek government imposes further tough austerity measures and accepts tighter European Union and International Monetary Fund oversight of its economy.