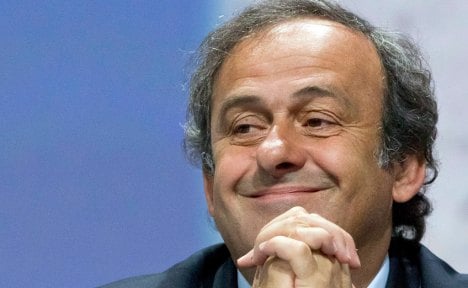 “Germany currently has the best team in Europe, they are very young and very creative,” the Frenchman told German daily Die Welt on Sunday. “They didn’t lose any of their European Championship qualification matches. They are the big favourites to win the championships alongside Spain.”

Platini, who led France to the 1984 European title on home soil, cast a critical eye over the current French team, coached by Laurent Blanc.

“We have two or three really good players like (Real Madrid’s) Karim Benzema and (Bayern Munich’s) Franck Ribery, but the rest are so-so,” admitted the 56-year-old.

Having made more than 70 appearances for France during the late 1970s and early 1980s, Platini said matches against Germany gave him several restless nights during his career playing for “Les Bleus.”

“I have had nightmares because of Germany,” he said.

“We lost to them on penalties in the semi-finals of the 1982 World Cup and again in 1986. “They were dramatic games.”

Platini has been the president of UEFA, European football’s governing body, since January 2007 and said having extra referees on the goal-line during matches was a better solution than installing cameras.

Since England had a Frank Lampard goal disallowed at the 2010 World Cup in South Africa, debate has flowed as to whether cameras should be installed in the goal mouth to rule whether or not the ball crossed the line.

“Football is the most popular sport in the world because it has simple rules that can work anywhere,” said Platini. “It is always better to use people who can assess situations – for example, a handball, rather than install complicated technology.”

alongside Portugal, the Netherlands and Denmark while France face co-hosts the