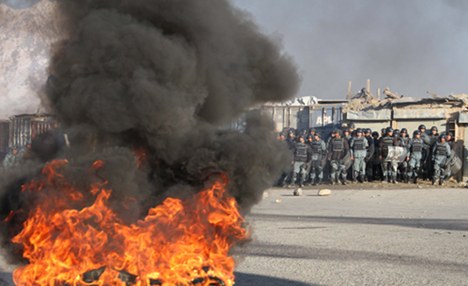 “The Risk Management Office on Sunday morning ordered its German and international experts in agencies and ministries to be withdrawn” in the Kabul area, the cooperation ministry said in a statement.

The decision was a “reasonable precautionary measure”, Cooperation Minister Dirk Niebel said adding that the experts’ security was a top priority.

Niebel stressed however that Germany would stick to the commitments made in the Afghan conflict. “As soon as the situation has calmed down the staff will resume their work,” he said.

The French foreign ministry said earlier Sunday that its embassy in Kabul was temporarily withdrawing all French civilian mentors and advisors from Afghan government institutions.

The withdrawal for “security reasons” comes as anti-US protests raged over the burning of Korans at a US-run military base.

The French foreign ministry said in a statement that the measure would be rescinded as soon as “conditions permitted.”

NATO and Britain said Saturday they were pulling staff out of Afghan government institutions.

Taliban insurgents have claimed responsibility for the shooting of the two US members of NATO forces, saying it was in revenge for the Koran burning — an incident that forced US President Barack Obama to apologise to the Afghan

NATO, which has a 130,000-strong US-led force fighting an insurgency in Afghanistan, has advisors throughout the Afghan government but commanding

officer General John Allen ordered them all withdrawn after the shooting.