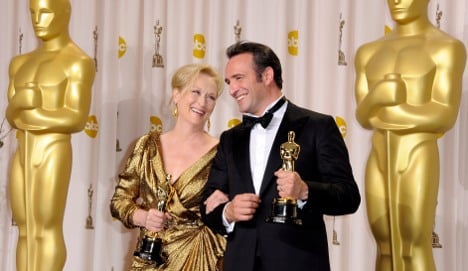 Wenders’ 3D film “Pina” about the choreographer Pina Bausch and her dance company, was nominated for best foreign-language film as well as the documentary prize.

But it lost out in the documentary section to an American contender “Undefeated”, which told the story of a struggling high school football team.

And the star of last year’s Berlin film festival, the Iranian film “A Separation” won the best foreign language Oscar.

Max Zähle, whose short film “Raju” was nominated also failed to collect a prize, while costume designer Lisy Christl, whose work on the film “Anonymous” was also in the game, also left without an Academy statuette.

All eyes were on Michel Hazanavicius’ “The Artist” which took best film, best director and best male actor as well as costumes and music. Martin Scorcese’s 3D film “Hugo Cabret” also took five Oscars, but in less headline-grabbing categories such as cinematography and art direction.

Frankfurt firm Pixomondo took an Oscar for Hugo’s special effects. “We are delighted and proud to hold an Oscar in our hands after our work for Hugo Cabret,” said Christian Vogt, head of Pixomondo Germany, according to Monday’s Frankfurter Rundschau.

Meryl Streep collected her third Oscar for her role as former British Prime Minister Margaret Thatcher in “The Iron Lady”, just after having been honoured with the Berlin film festival’s Golden Bear for her life’s work.

Woody Allen took his fourth for the script of his film “Midnight in Paris”, although he was not there to collect it in person.

Best co-stars were Octavia Spencer for her work in “The Help” and British veteran Christopher Plummer for his in “Beginners”.