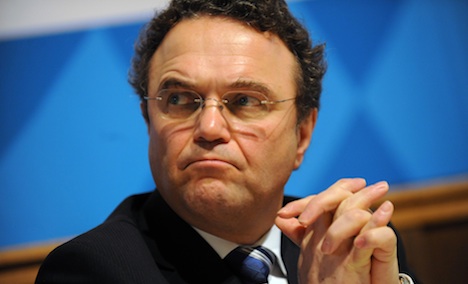 Friedrich told the news magazine Der Spiegel, “I do not mean that Greece should be kicked out of” the 17-nation eurozone, but he said the bloc should “create incentives for an exit that they cannot turn down.”

Merkel is opposed to Greece leaving the eurozone, and agreed in January with French President Nicolas Sarkozy that Greece should be kept in the monetary union, as long as its government imposes strict budgetary reforms. She expects the Bundestag to approve the second bailout package in a vote Monday.

Friedrich, of the CSU, the Bavarian sister party to Merkel’s Christian Democrats, is the first member of the federal government to have spoken out suggesting a radical change of course in euro crisis policy.

“Outside European monetary union, Greece’s chances of regenerating itself and becoming competitive are definitely better than if it remained inside the eurozone,” Friedrich told Der Spiegel.

But CSU head Horst Seehofer predicted Saturday in Munich that his fellow party members would support the Greek rescue package. “I think, that a vast majority of our CSU representatives will vote in favor on Monday,” he said.

Meanwhile, at a meeting of G20 finance ministers and central bankers in Mexico City, German Finance Minister Wolfgang Schäuble said it made “no economic sense” to be “endlessly” pumping money into eurozone rescue funds.

“No, this would create disincentives for countries to carry on consolidating and reform, and would not improve the eurozone’s economic outlook,” he told a business reception in the Mexican capital.

Germany has steadily resisted calls to bolster the eurozone’s firewalls as a way to assure the markets that contagion from the Greek debt crisis will be contained.

EU leaders are scheduled to meet in Brussels next week to work on the issue, but some have suggested that the eurozone combine its existing EFSF bailout fund with a more permanent bailout fund, the ESM, which is scheduled to be launched in July. A combined fund would give the eurozone about €750 billion ($1 trillion) in cash and guarantees to help deal with future debt crisis problems.

The head of the OECD, Angel Gurria, called Saturday for Europe to “build the mother of all firewalls,” and US Treasury Secretary Timothy Geithner made a plea for Europe to create a “strong, more credible firewall.”