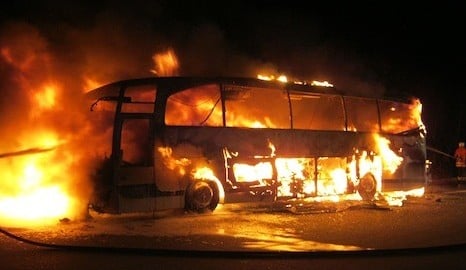 The school group had been returning home to Hamburg from a ski trip in the Allgäu region in southern Germany, according to the public broadcaster NDR.

The bus driver smelled smoke at approximately 3 a.m., and immediately pulled the bus to the side of the motorway. Some of the youths aged 17 to 19 climbed out of the windows of the bus to escape the fire, and rescue officials attributed the lack of serious injuries to the fact that the students were in good physical condition.

About 120 fire and rescue workers spent four hours cleaning up the area around the bus, which was eventually fully engulfed in flames. The fire closed the A7 between Bispingen and Evendorf just south of Hamburg for several hours.

The cause of the fire has not yet been determined, but fire department officials speculated that it could have been the result of a technical defect.

The uninjured students were picked up by their parents during the night and brought home to Hamburg. A police report on the accident is still forthcoming.