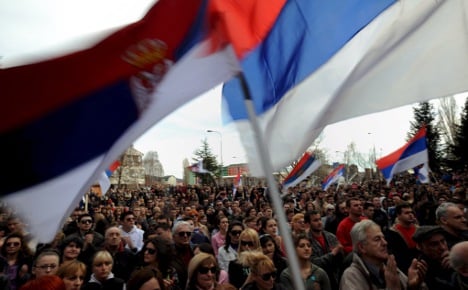 “It is doable, it is reachable if we stay patient, flexible, rational and busy,” the German minister told reporters after meeting Serbian counterpart Vuk Jeremic during a unexpected visit to Belgrade.

“The next step is the status of candidate of EU. Germany would like to see this step taken at the next meeting of the European Council,” Westerwelle said, praising Serbia for its efforts to implement earlier agreements reached in talks with its former province of Kosovo which declared independence four years ago, including freedom of movement.

The visit came as EU-mediated talks between Belgrade and Pristina were underway in Brussels in a bid to reach an accord that would allow Kosovo to attend regional meetings, something which Serbia currently rejects.

The matter needs to be resolved before next week’s decision by EU leaders on whether to grant Serbia EU candidate status. Such a decision was postponed in December because of lack of progress in the Serbia-Kosovo talks.

But Westerwelle said Serbia “has gone very far” since then and was close to the goal, adding that remaining issues “are close to being solved if approached in a spirit of cooperation.”

“The fact that I am here is appreciation for what you’ve done so far,” Westerwelle said.

The German minister also met President Boris Tadic, who said after the meeting that “Serbia has a constructive approach in the dialogue with Pristina and is maximally opened for a deal.”

“I believe we meet all the conditions for the candidacy status for EU membership,” Tadic said in a statement.