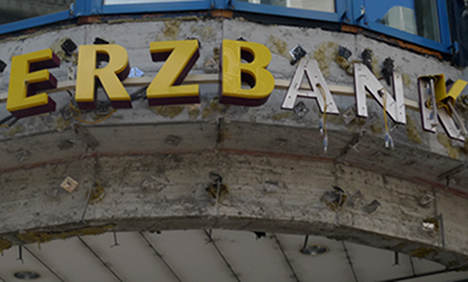 The bank also announced new plans to beef up its core capital by more than €1.0 billion ($1.3 billion).

in 2011 and operating profit fell even more sharply, plunging 63.4

The numbers were worse than expected and Commerzbank shares nosedived by nearly 10 percent at the start of trading on the Frankfurt stock exchange, plunging 9.6 percent to a low of €1.87.

“2011 was characterised for Commerzbank by a successful first six months and difficult market conditions in the second half of the year,” said chief executive Martin Blessing.

Nevertheless, the bank insisted it was satisfied that “despite the massive charges resulting from the European sovereign debt crisis, we attained a net profit overall.”

Indeed, in the core banking division, operating profit “more than doubled” to €4.5 billion, thanks to the stable economic situation in its main markets of Germany and Poland.

By contrast, the bank’s asset based finance division booked an operating loss of €3.9 billion after it was forced to write down the value of its holdings of Greek sovereign bonds to 26 percent.

Looking ahead, chief executive Blessing said Commerzbank “is on track and is strategically well positioned. In 2012, we intend to continually improve our operating profitability and further reduce risks.”

The high degree of uncertainty associated with the European sovereign debt crisis “will, however, continue to pose challenges for us,” Blessing warned.

But with Commerzbank’s focus on the core markets Germany and Poland, “we are well prepared to meet these challenges. For this reason, we assume that the core banking division will again post a solid operating profit in 2012,” the chief executive said.

Commerzbank said it was making “very good progress with the implementation of the package of measures presented in January of this year to strengthen its Core Tier 1 ratio.”

Already at the end of last year, Commerzbank had been able to reduce the additional capital requirement determined by the European Banking Authority (EBA) from €5.3 billion to around €1.8 billion.

And on the basis of the measures already taken, Commerzbank said it was confident that it would be able fulfil the EBA requirements by the cut-off date June 30, 2012 “in reliance on its own strengths.”

But as an additional measure to meet those requirements more quickly, Commerzbank said it would raise it capital by 10 percent and boost the important Core Tier I capital by more than €1.0 billion by swapping so-called hybrid capital instruments, subordinated debt securities and other capital instruments into shares.

“With execution of the transaction the already significantly reduced EBA capital requirements of €1.8 billion as of the end of 2011 could be further reduced to less than €0.8 billion,” Commerzbank said.