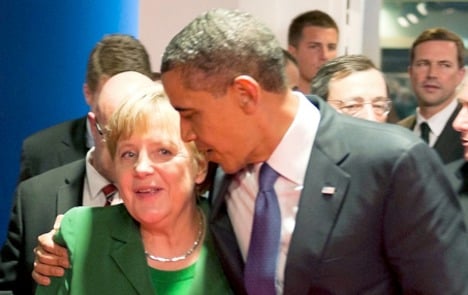 The White House said late Tuesday that “the president thanked the chancellor for her leadership and welcomed last night’s agreement in Europe on a new rescue programme for Greece to help reduce its debt to sustainable levels.”

“The president and chancellor agreed that the planned EU fiscal pact, recent actions by the European Central Bank and reforms by Spain and Italy have also been positive steps in addressing the eurozone crisis,” White House spokesman Jay Carney added.

But back home the reaction to the new €130 billion Greek bailout deal, agreed by the eurozone’s finance ministers Tuesday morning, has been less friendly.

Prominent Merkel-ally Wolfgang Bosbach, deputy parliamentary leader in the chancellor’s Christian Democratic Union, has already announced that he would not vote for the new package.

“We’re marching with great strides towards a union of liability, and we’re burdening future generations with risks that I find unjustifiable,” he told the Passauer Neue Presse.

Bosbach has a history of defying his party on the euro crisis – he also opposed the expansion of the European Financial Stability Facility (EFSF) last year.

He has been joined this time by the German Taxpayers Federation (BdSt), which has called on the German parliament to vote against the bailout package. “Once again, the taxpayers are the losers in the second Greece package,” BdSt President Karl-Heinz Däke told the Neue Osnabrücker Zeitung.

Private creditors are also expected to agree to debt cuts of €107 billion to save Greece from its spiralling debts, but it remains unclear whether enough banks, hedge-funds and other financial institutions will participate in the plan.

The bailout deal will be put to the German parliament next Monday.