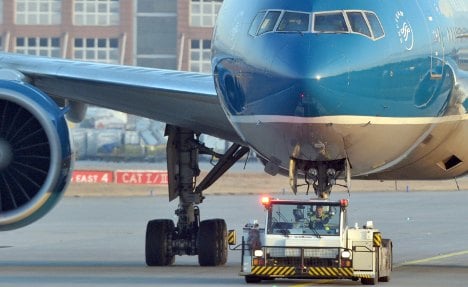 Matthias Maas, a spokesman for the GdF union which represents the 200 workers said so-called “apron staff” that guide planes on the ground would be back on the job beginning with Wednesday’s night shift. Negotiations with airport operator Fraport are set to begin Thursday morning.

Hundreds of flights – mostly intra-European and German domestic flights – have been cancelled since warning strikes took place Thursday and Friday followed by full strikes from Monday through Wednesday.

About 165 of the roughly 1,200 flights scheduled to take off on Wednesday were cancelled, according to Fraport. About 80 percent of scheduled flights remained on schedule by training temporary employees to take over the duties of the striking workers.

Despite Fraport’s assertion that its contingency plans had worked, GdF board member Markus Siebers called the strike “a great success.”

Although it has remained largely quiet during the strike, the airport’s main airline Lufthansa on Wednesday called on Fraport to resist the controllers’ demands of increase in their salaries and a decrease in working hours.

“We are the party most affected by the strike,” Lufthansa manager Stefan Lauer told the Financial Times Deutschland. “We believe Fraport should not give in to the GdF’s blackmail.”

Right now, controllers working on the aircraft apron and in air traffic control centres earn between about €50,000 and €70,000 per year, sums which the GdF say don’t take into account factors such as an increased workload since a new runway opened.

“This dispute continuing to the detriment of passengers and airlines must come to an end,” said Stefan Schulte, an executive with Fraport.