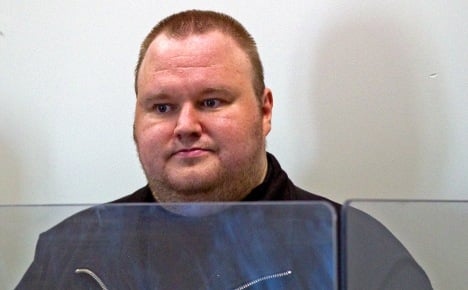 The 38-year-old German national said he was happy to be released following a month in custody after New Zealand police, cooperating with a major US probe, raided his sprawling “Dotcom Mansion” in Auckland.

“My client’s proposition is that the case they have presented doesn’t have any substantial basis at all and when it is analysed and revealed for what it is, that will be the view that prevails,” he said.

The bail decision is a setback for US authorities, who are seeking to extradite Dotcom and three others arrested in the January 20 raid.

Two previous bail hearings had accepted the prosecution case that the Internet millionaire was an “extreme flight risk” because he had the wealth and possible criminal connections to slip out of the country if he wanted.

But Judge Nevin Dawson said the danger of Dotcom fleeing had diminished because all his funds had been seized and investigators had not uncovered any new bank accounts or assets in his name since his arrest.

“It would seem that he has every reason to stay to be with his family and to fight to keep his significant assets,” Dawson said.

He granted Dotcom bail but barred him from accessing the Internet and booking helicopter flights, ordering him to stay in his Auckland property unless there was a medical emergency.

Dotcom, who allegedly earned $42 million from his Internet business in 2010 alone, declined to comment on his case, aside from saying his treatment by New Zealand police “resembled an audition for American Idol.”

“I’m relieved to go home and see my family, my three little kids and my pregnant wife,” he told reporters.

The US Justice Department and FBI allege Megaupload and related sites netted more than $175 million in criminal proceeds and cost copyright owners over $500 million by offering pirated copies of movies, TV shows and other content.

Megaupload was founded in 2005 but shut down last month when its assets were frozen as part of the US probe.

A US application for Dotcom’s extradition is expected to be heard on August 20. US authorities have said they will seek the maximum penalty of 20 years in jail if he is brought before a US court.

The three other Megaupload executives arrested with Dotcom, who legally changed his name from Kim Schmitz, had already been granted bail.

The raid on Dotcom’s home netted a 1959 pink Cadillac, numerous other luxury cars and valuable artworks.

Since his arrest, there has been a steady stream of media revelations about his extravagant lifestyle, including claims his mansion had a swimming pool filled with imported spring water and gold toilet roll holders.

The portly millionaire also reportedly had a butler in his mansion whose duties included retrieving stray ping pong balls when Dotcom was playing table tennis.

Prime Minister John Key said this month that since Dotcom’s arrival in New Zealand in early 2010, his office had received complaints from the public about loud parties and cars speeding around the mansion, which is in his electorate.

Key said his staff had passed the complaints on to police.

A documentary uploaded online shows Dotcom, surrounded by topless women, spraying champagne on board a superyacht during a “crazy weekend” in Monaco that reportedly cost $10 million.

“Fast cars, hot girls, superyachts and amazing parties. Decadence rules,” said the blurb accompanying the documentary, which Dotcom dedicated to “all my fans.”