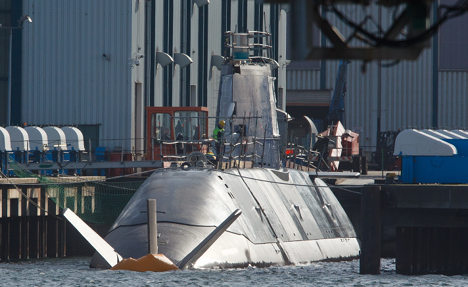 The 68-metre-long sub is currently at the shipyard of the HDW shipbuilding company, which is testing the vessel before it is shipped to Israel later this year. Police in boats have been protecting it.

Although HDW and government officials have lately remained silent about the sub, it is thought that officials are preparing to begin extensive in-water checks before delivery.

The advanced Dolphin-class sub combines high-tech diesel and electric power sources. It is among the world’s most advanced submarines and is allegedly capable of launching nuclear weapons.

Israel has already received three Dolphin-class submarines from Germany and is expected to get at least two more by the end of 2013.

But their sale – partly subsidised by German taxpayers – has been controversial in light of Israeli military policies in the Middle East.

The main sticking point has been Israel’s approving of Jewish settlements in east Jerusalem despite Palestinian opposition.