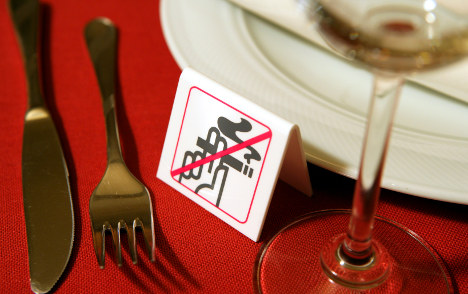 The Constitutional Court, based in the southwestern town of Karlsruhe, ruled that smoking bans must be imposed on restaurants and bars alike, or not at all.

Hamburg’s unique smoking ban – the matter is decided at state, not federal, level in Germany – says that bars that only offer drinks are allowed to keep a separate smoking room, while places that offer food are not. The Karlsruhe judges decided that this was a violation of the German constitution’s articles safeguarding fair competition.

Hamburg restaurants are now allowed to install separate smoking rooms until the city’s authorities come up with a new ruling.

The court also said that the same conflict does not exist in any other German state, where there are either blanket smoking bans or exceptions for smoking rooms.

The ruling was sparked by a legal complaint from the manager of a motorway service station, who wanted to install a separate smoking room for her customers – she said that 80 percent of them were smoking truck drivers.

The court based its decision on evidence from the German Cancer Research Centre, which said that “from a scientific point of view, it makes no difference if the toxic substances in tobacco smoke are inhaled in a bar or a restaurant.”

Almost all German states allow exceptions to their smoking bans in bars and restaurants. Only Bavaria and Saarland have imposed a total ban.