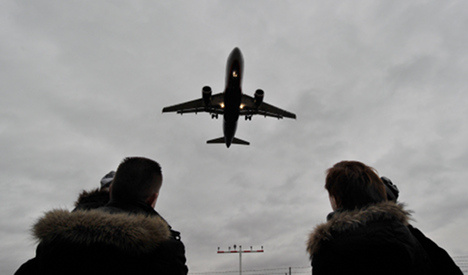 There have been at least three incidents of falling bodily waste in the last few weeks in Bavaria, Baden-Württemberg and Saxony, according to the daily Bild Zeitung.

Although chunks of ice have been known to fall from aircraft in the past, the string of recent incidents has officials scratching their heads, but thankful that no-one has been hurt so far.

In Rodersdorf, Saxony two weekends ago, an 81 year-old pensioner heard something hitting his roof. Upon further investigation he found 20-centimetre frozen balls in his garden that stank terribly.

And earlier in February a 1.5-kilo chunk of urine crashed into a family’s garden in Niefern, Baden-Württemberg.

A family in Nuremberg had a similar experience when a 2-kilo piece of ice smashed into its garden.

“I was relaxing in our living room. Suddenly there was a huge bang,” 59-year-old Erika Keil told Bild. “I thought our roof was caving in.”

“When an aeroplane’s water tank is not closed, water trickles out, freezes and falls off,” a Nuremberg airport official told Bild.

Falling ice – whether from human waste or ice that builds up on the plane and then drops to earth – is a common phenomenon. Though no-one is known to have been killed by it, there have been injuries.

In 2009, for instance, a British pensioner in Bristol was bruised after a block of ice fell from a plane and hit his thigh.