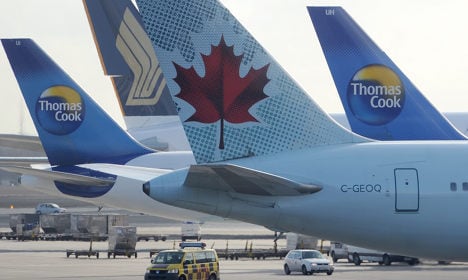 The GdF union, which is representing about 200 tarmac staff, announced late Sunday that the strike would be extended until 5 am on Wednesday because management was refusing to negotiate.

“We wanted to give the other side the chance to signal they wanted to negotiate,” said GdF board member Markus Siebers. “Since this didn’t happen on Sunday, we have extended the strike.”

The GdF had already held warning strikes last Thursday and Friday that led to the cancellation of about 500 flights.

Fraport, the agency which runs Frankfurt Airport, said 223 of about 1,250 flights scheduled for Monday – mostly domestic and intra-European – had been cancelled. Long-haul flights remained largely on schedule.

“So far everything is going smoothly. The passengers have adjusted,” a Fraport spokesman said Monday.

Officials said they were doing everything possible to soften the effects of the strikes, including training workers to temporarily take over the ground controllers’ duties.

Lufthansa said it encouraged passengers to check the status of flights before heading to the airport and was offering free train vouchers for domestic travel.

The controllers have complained that they are being unfairly compensated compared to workers at other German airports. They have claimed that Fraport has been unwilling to negotiate fairly with them.

Fraport charges that the GdF has gone rogue and has called the strike action “incomprehensible.”

Siebers said that strikes would continue until Fraport negotiates.

“If Fraport moves, we are ready to talk,” he said.