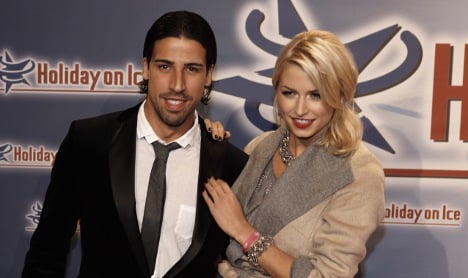 “I learned of the business on Thursday evening, and I think it is very, very sad and a great shame that something like this could happen,” Khedira, whose father is from Tunisia, told Die Welt newspaper on Sunday. “I respect the different religions that there are, and the faiths people have. But I can’t understand why people aren’t allowed to express themselves freely.”

Tunisian paper Attounissia re-printed the photo of Khedira and Gercke embracing in their home last week. In the picture, Gercke, who won the 2006 season of casting show “Germany’s Next Topmodel,” is almost naked, while Khedira, wearing a black suit, is covering her breast with his arm.

The Tunisian justice ministry announced last Thursday that this was a contravention of the country’s morality and tradition laws.

Police then arrested the paper’s publisher, Nasreddine Ben Saida, its editor-in-chief and one journalist. The two employees of the paper have since been released, but the publisher is still in custody. He could face up to five years in jail and a fine of around €600.

The organization Reporters Without Borders has called for the immediate release of Ben Saida. The journalists’ rights group says he is the first journalist to be arrested in the country since the fall of its dictator Zine al-Abidine Ben Ali last year.

The group also accused the justice ministry of hypocrisy, since similar photos are regularly to be seen in foreign publications on sale in Tunisia.

Ben Saida and the entire editorial team of Attounissia have gone on hunger strike in protest at the arrest.