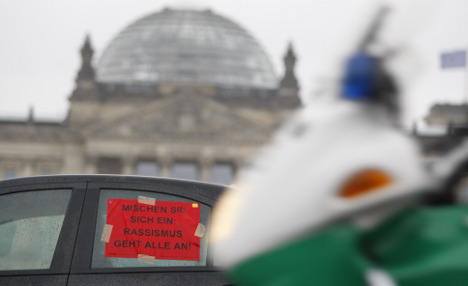 Semiya Simsek said she and her family were treated badly by police investigating the murder of her father who was the first of nine Turkish and Greek shopkeepers to be shot to death in the string of killings between 2000 and 2006.

Detectives long assumed the killings were connected to Turkish crime, drugs or money-lending rings. It was not until last November that the self-styled National Socialist Underground group claimed responsibility for the murders – and that of a policewoman in 2007.

The group’s unveiling shocked German society, and drew attention to how the murders were handled by the authorities.

“For years the police tried to get something out of us that was not there. We were accused of keeping quiet because we are Turks. We were not believed because are Turks,” Simsek, who was 14 when her father Enver was shot dead in 2000.

Speaking to the Tagesspiegel on Saturday, Simsek said the actions of the investigating authorities had been so unpleasant that she, “lost my trust in this state, although I was born here.”

She is scheduled to speak at Thursday’s national memorial service in Berlin, “because I want to shake up the public, so that nothing like this is allowed to happen again,” she said.

Federal prosecutors said this weekend they were confident of pressing charges in relation to the murders by this autumn. By then there should be evidence to prove that the one surviving suspect, Beate Zschäpe, was a member of the gang.

She gave herself in to police shortly after the flat she shared with the two NSU members was destroyed in an explosion following their murder-suicide deaths in the wake of a failed bank robbery.