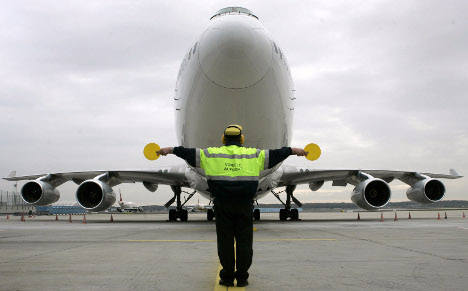 About 200 personnel – which include workers in the actual air traffic control centre, as well as those working on the airport tarmac – will take part in the stoppage beginning at 3 pm and lasting until 10 pm, according to the GdF trade union.

“We assume that air traffic will be massively affected,” said Markus Siebers, a GdF spokesman, saying that airport operator Fraport had missed a noon deadline to resolve the union’s complaints.

The heart of the labour dispute: money and working hours. GdF has said workers in Frankfurt are underpaid and overworked compared to air traffic controllers at other German airports.

They’ve been involved in a long-running labour dispute with Fraport that’s dovetailed with complaints among controllers at airports around the country. Last year, the nation’s air traffic control union called for a general strike, which was only averted at the last moment.

At negotiations over higher wages have brought little movement and Fraport has rejected settlement offers brokered by outside mediators.

Fraport denounced the action as “irresponsible” and “incomprehensible”, but pledged to limit disruption as much as possible.

“If someone refuses to budge an inch on double-digit demands that include increases of between 50-70 percent in wages, working hours and bonuses, they’re acting irresponsibly,” said Fraport board member and industrial relations director Herbert Mai.

Fraport said it had already drawn up contingency measures “to keep operations up and running as far as possible. But delays and cancellations cannot be ruled out.”