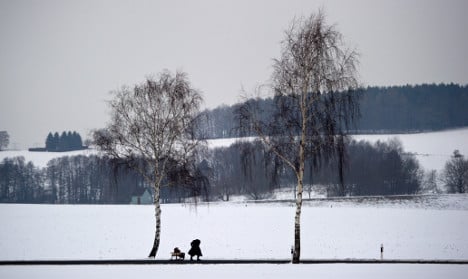 Two people died on icy roads in the eastern state of Saxony early on Wednesday in two serious accidents. The worst was on the A4 motorway near Hainichen, according to the Leipziger Volkszeitung paper. There a Polish bus skidded and hit a bridge, killing a 61-year-old passenger and leaving six others injured.

Another man died on the A72 near Chemnitz on Tuesday night when the car he was driving hit the central barriers and then rebounded into the path of a truck. The 27-year-old was trapped in the wreckage and died of his injures.

The bad weather also snarled traffic across the southern part of Germany on Wednesday, as winds created metre-high piles of snow in some regions. The Munich Airport was forced to cancel some 120 flights due to snow.

The wintry conditions were created by a low pressure system, the German Weather Service (DWD) said. It dumped up to 10 centimetres of snow over Bavaria and Baden-Württemberg on Tuesday night, while ice and snow clogged up traffic in large areas of Rhineland-Palatinate.

Snow is likely to continue falling in the southern part of the country for much of the day, combined with at times strong winds to create storms.

Daytime temperatures crept above zero across much of the country on Wednesday, with highs of six degrees Celsius in Hamburg, and five degrees in Frankfurt, while there were also periods of sunshine.

But the cold ground combined with humid, cold air coming over the Baltic Sea and Poland to northern Germany is expected to make for icy roads over the coming few days, as well as stormy weather generally, sometimes combined with snow.

The cloudy weather in the south over the next few days should not only result in continuing snowfall, but also warmer temperatures with highs of up to six degrees Celsius. Lows should not fall to less than minus six degrees, although the snow and at times rain which will spread to the rest of the country during Thursday and into Friday will keep it feeling wintry.

Looking towards the weekend, Saturday should see some snow and rain, with top daytime temperatures of up to seven degrees Celsius in the south and nine degrees in the north west, the DWD said.