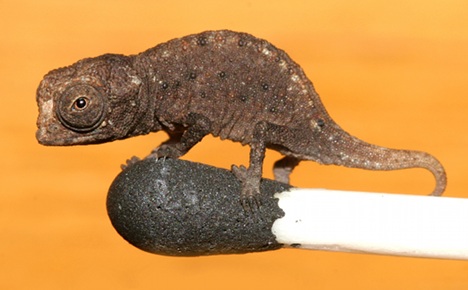 Researchers from Munich, Darmstadt and Braunschweig, as well as California, have named the 16 millimetre-long beast Brookesia micra – Brookesia is the name of the genus the chameleon belongs to and micra represents the animal’s small size.

The chameleon lives in forests and eats insects and tiny mites, the scientists discovered. It is brown in order to blend in with the trees and doesn’t change colours like its better-known chameleon cousins.

Other vertebrates – such as some fish and frogs – are even smaller than Brookesia micra. But the endangered chameleon is thought to be the smallest of its kind.

Overall, the scientists discovered four new species of extremely small chameleons during their expedition to one of the most biologically diverse countries on the Earth. Nearly half of the world’s 193 known species of chameleon are thought to live only in Madagascar, which is off the south-western coast of Africa. That includes the world’s largest at 70 centimetres and now the world’s smallest.

Vences and his colleague, Frank Glaw of the Bavarian State Collection of Zoology, have alone discovered 140 new animal species in Madagascar and named them scientifically.

Their research is being published in the scientific journal PLoS ONE.