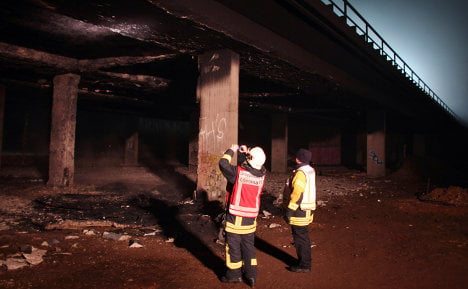 A crucial part of the motorway between Düsseldorf and Cologne was completely closed on Tuesday in the wake of the smash. Burning plastic pipes under the motorway bridge filled the road with black smoke, causing an accident in which one man was killed and 13 people injured, two seriously.

The smoke was so thick and toxic that fire fighters had to use breathing equipment to get to the smashed cars, while the fire itself damaged the bridge so badly that chunks of concrete have fallen from it.

Heavy moving equipment normally used to remove crashed vehicles from accident sites could not be brought onto the bridge because it was so badly damaged. Some of the trucks involved in the crash were lowered off the bridge with winches.

The North Rhine-Westphalian state road construction firm told Die Welt newspaper on Tuesday evening the 100-metre bridge would have to be torn down and rebuilt.

The paper said around 70,000 vehicles usually use the bridge each day, as the autobahn is one of the busiest commuter routes in the region, while alternative routes are already chronically full of traffic.

Police are investigating what they said could have been the latest in a series of arson attacks in the area near the bridge around Dormagen.

“It could be a repeat offender, it could be that someone keeps setting fires – we don’t know, Hans-Jürgen Petrauschke, head of the local police told the regional NGZ news portal.

He said it was difficult to collect evidence from the sites of fires and called for people living nearby to report any potential sightings of arsonists. “The population has to become active in the investigation. Someone must have seen someone at one point,” he said.

There have been 12 arson attacks in the area around Dormagen in the past year, and 36 near the nearby village of Grevenbroich in the same period.

The plastic pipes under the motorway bridge were stacked three metres high, and could have only been set on fire with reasonable effort, according the Peter Schöpkens, head of the Neuss fire brigade. “One cannot set such plastic pipes on fire like that with a cigarette lighter. Some kind of combustion agent was probably used,” he said.