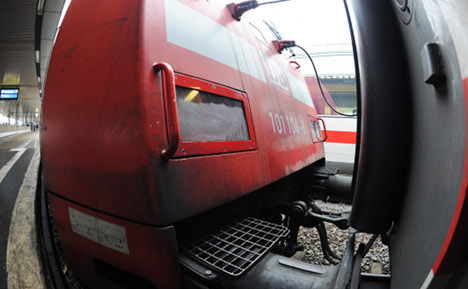 She immediately pulled the emergency brake and once the train had stopped, she and other train personnel pulled him into a carriage and gave him blankets, under which he fell asleep.

The man – a 26-year-old from the Netherlands told them he was desperate to visit his sick child but did not have enough money for a ticket on the EuroNight train early Tuesday morning.

The BZ newspaper said he had jumped on the running board between the locomotive and the train’s first passenger carriage at Berlin’s main train station and wedged himself into the space.

“The man put himself in acute danger. He was lucky that the railway employee saw him by chance,” a Deutsche Bahn spokesman told the paper.

The train had only been travelling for about half an hour, but in this week’s wintery conditions, with temperatures at minus seven – before wind chill – he was already suffering the first signs of hypothermia.

He was taken off the train at the next stop – Hannover. “Because apart from travelling without a ticket, there was no crime, we took his details and let him go at about 2 a.m.,” the Bahn spokesman said.

Although he was directed to the station’s mission which helps homeless people, he was not seen again.

The night train from Berlin to Amsterdam costs about €140 but tickets can be had for under €40 if bought in advance.