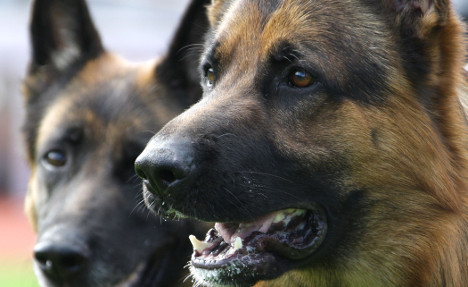 The 47-year-old woman was out running on Saturday morning near Adelmannsfelden in the south German state of Baden-Württemberg when four German Shepherd dogs ran out of a house and attacked her, according to police.

As their 56-year-old owner ran out and tried to pull the dogs off the jogger, he suffered a heart attack and fell to the ground.

Despite a number of bite wounds, the jogger immediately tried to save the man, while his 83-year-old mother came out of the house and dragged the dogs off and locked them into a pen, police said.

The woman continued to administer first aid until an ambulance arrived, but she could not resuscitate the owner and he was declared dead on the scene.

Police said the dog owner had kept the animals in the house overnight because it had been so cold outside. He was taking them into a fenced off area in his garden when they ran off to attack the jogger.

A police spokesman told The Local, “The dogs will be examined by police dog handlers and a vet before a decision is made on their future.”

The jogger suffered minor injuries and was treated by a local doctor.