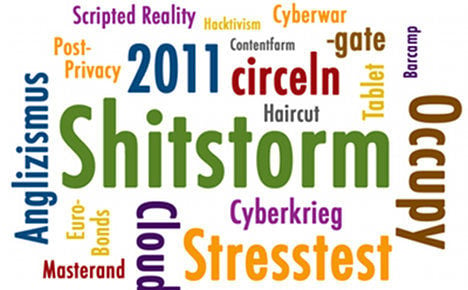 The “Anglicism of the Year” jury defined Shitstorm as a public outcry, primarily on the internet, in which arguments mix with threats and insults to reach a critical mass, forcing a reaction.

“This new kind of protest is clearly different in kind and degree from what could be expected in the past in response to a statement or action,” said jury member Michael Mann, who runs a language website called Lexikographieblog.

The jury said in a statement on Monday: “Shitstorm fills a gap in the German vocabulary that has become apparent through changes in the culture of public debate.”

It added that established German words, such as Kritik (criticism), were simply not descriptive enough.

Shitstorm came into widespread use last year in connection with the financial crisis in Greece and the plagiarism scandal which forced the then Defence Minister Karl-Theodor zu Guttenberg to resign.

The second most important Anglicism this year was Stresstest, referring to the analysis of banks’ financial strength during the European financial crisis, the jury decided.

Rounding out the top three was circeln which comes from the new social network Google+ and means to add someone to a contact list.

The Anglicism of the Year contest, organised since 2010 by University of Hamburg linguist Anatol Stefanowitsch, is designed to recognise English’s contribution to German as the language evolves.

“The borrowing of words is a natural process that occurs in any language,” the jury’s statement said.

The big winner in 2010 was leaken, which was adopted during controversies such as the sensitive leaking of government information to the Wikileaks website.