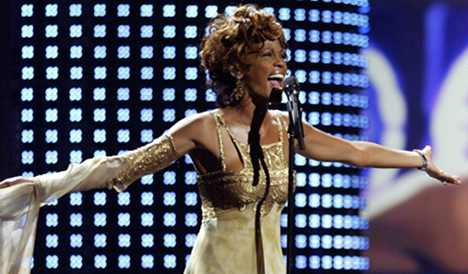 The pop star was found unconscious in her Beverly Hills hotel room Saturday close to 4:00 p.m. Paramedics spent 20 minutes trying to revive her. There was no evidence of foul play, various news reports said.

Three-time Grammy award winner Houston had planned to attend a pre-Grammy Awards party that evening. No official cause of death has been released. Houston had a long history of drug abuse and also suffered an abusive marriage.

A writer on the German television station ARD’s website condemned alcohol, drugs, addictions and “the loneliness of the big stars. Unfortunately her exceptional talent and her beauty were not enough to make her a happy person. How unfortunate. She was a true sensation in the 90’s. Unforgettable. That makes me so sad.”

On the Focus magazine website, one commentator wrote: “It’s always tragic to see when a person succumbs to his problems and is not able to climb on board again. One is even more taken aback when it hits prominent people because they seem to have such a big career and have everthing that you think they’ll need to change course. The shock comes when you see that they haven’t been able to do that.”

As a tribute to Houston, singer Jennifer Hudson is going to sing one of Houston’s songs at the Grammy ceremonies Sunday.