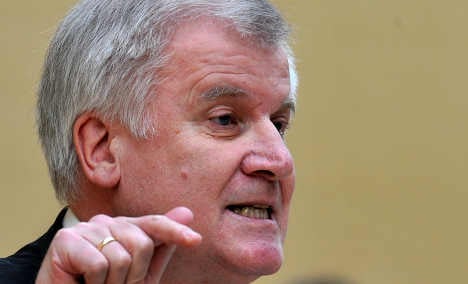 The “Grundgesetz” guarantees citizens essential rights, the CSU chief said in an interview with the newspaper Welt am Sonntag. The CSU is the Bavarian sister party to Chancellor Angela Merkel’s ruling Christian Democratic Union party.

Seehofer told the paper that the law says “all of the state power comes from the people.” The law allows for votes and referendums, but referendums are allowed for only two reasons: when deciding about a new division of the German states or whether the basic law should be changed by a new one, the paper wrote.

Since the Federal Republic was founded in 1949, there has never been such a German-wide referendum.

The opposition Social Democratic Party and the Greens have long called for more direct democracy, something Merkel’s government has continuously rejected. But now Seehofer is calling for such an element to be written into the constitution, the paper wrote.

He doesn’t want significant decisions in European policy to be decided by the German parliament alone.

“The CSU is for a people’s vote in Germany over the basic questions about Europe. That’s a good path to bring the European idea closer to citizens,” Seehofer told the paper. The instrument of a people’s referendum should be anchored in the German constitution, he told the paper.

A week ago the Ferdinand Kirchof, the vice president of the Federal Constitutional Court, told the paper that Germany “finally needs a direct democracy in the EU,” saying Brussels had distanced itself from European Union citizens and from the home regions comprising the EU.

Seehofer rejected the widespread view that if there had been a people’s vote, the euro would never have been introduced.

“I don’t agree with that notion,” Seehofer told the paper. “Unpopular decisions have a chance to be approved by citizens. You have to make the effort to explain why and be transparent about it. People are smart enough even to vote on difficult questions.”

Referendum skeptics say key decisions, like the rearmament of Germany, its East Bloc policy and the unification of the country, would not have been possible if a people’s vote had been in place.

Seehofer said a people’s vote is needed when a certain level of financial backing is made for the euro deficit countries. “I think it is very important to allow citizens to have this control over power.”

European Parliament President Martin Schulz agrees there should be more direct democracy for EU citizens, but notes that the CDU and CSU have not been in favor of this.

“I wonder when it comes to Europe how some are in favor of a referendum when they have until now always prevented that from happening on a national basis.”