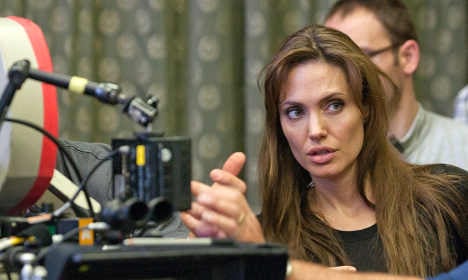 At the Berlin film festival to present her unflinching drama about rape as a weapon of war, “In the Land of Blood and Honey”, the Hollywood icon-cum-humanitarian told AFP her turn behind the camera was aimed at using cinema as a force for reconciliation.

“I’ve written a lot of journals while traveling over 10 years in the conflicts around the world and being frustrated by the lack of intervention,” said the 36-year-old Oscar-winning actress.

“So I went to the region and started to really look at the Bosnian war, but I couldn’t really understand or figure it out, and I felt this is my generation this happened to so I should know this. So I gave myself some education.”

Jolie, who backs a range of causes as a UN goodwill ambassador, said her research inspired her to start writing a screenplay and her partner Brad Pitt

encouraged her to show a rough draft to people from all sides of the brutal 1992-1995 war.

But when it came to making the film, she realised she was the only one with both the objective distance and passionate commitment to do the job.

“And this is how I found myself being a director!” she said.

“I knew that there might have been people who were technically more capable than me, but I knew I really, really cared from the bottom of my heart so

therefore I felt I should do it.”

She filmed versions of the movie in local languages and English in parallel. It tells the story of a young Muslim woman and the policeman son of a Bosnian Serb general who had a fling before the conflict broke out.

When they meet again, she has been taken prisoner by a unit of the Bosnian Serb army commanded by her former lover.

As the women around her are gang raped, the officer offers her protection, telling the other soldiers she is his “property”. But the upheaval of the relentless war means he is only able to shield her for so long.

Jolie said the most difficult part of filming was asking her actors, almost all of whom come from the former Yugoslavia and had their own bitter memories

of the war, to simulate the savagery that tore their country apart.

“It was very hard for everybody, for the actors, the men who had to be the aggressors,” said Jolie, who is in the German capital with Pitt and their six

“They were fathers, husbands and very sweet men and they didn’t want to do that. But they knew also they had to do it on behalf of the women just to show the brutality they suffered.”

ordered to undress at gunpoint while soldiers look on and laugh — an experience recounted to her by a prison camp survivor.

“This is one that you just never want to ask anybody to do and you are asking real older women to do this,” she said.

professional. I came to them several times asking, ‘Are you really OK, are you

She said she hoped Serbs would see the film with open minds when it is screened in wide release this month.

“I went to Auschwitz recently and so many names are Serb names all along the walls because they fought against the Nazis .. and later they were to be the aggressors,” she said.

“I think it’s important to study (genocides) and to understand them so we will really understand how to stop them.”

Bosnia’s war between its Croat, Muslim and Serb communities claimed some 100,000 lives. Tens of thousands of people were held in prison camps, where

torture and abuse were commonplace. Some 20,000 women were raped, according to the government’s estimates.

Asked what’s next, Jolie said she would keep her focus on the world’s trouble spots.

“I have been working on something that deals with Afghanistan but I haven’t shown it yet to anybody,” she said