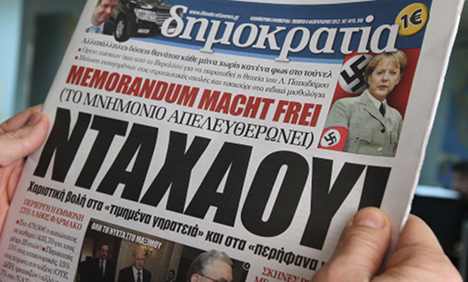 In the face of further belt-tightening, which the populace blames on German leader Angela Merkel’s policies, long-time German residents of Greece say there has been a worsening of Greek-German relations.

They say some Greeks feel Germans are playing the role of the teacher who knows better.

“You know everything better and when someone is lying on the ground you know how to give him a good kick,” a market vendor in Athens told a German woman who has lived in Greece for 32 years.

Diplomatic circles and the journalist association have warned against escalating the bad feelings and the tourism industry is trying to contain the damage.

But newspapers quote headlines in the German press and note that the Germans are blaming the Greek populace as a whole and not its politicians for the financial difficulties. The Greek press notes that German papers have run stories about the “lazy Greeks.”

Young people in a Greek bar were clearly irritated about this, noting that it is just as unfair to make stereotypes about the Greeks as it is about the Germans.

But anti-German talk and Nazi comparisons are increasing. The populist newspaper Dimokratia published a picture of Merkel in a Nazi uniform with the subtitle Memorandum makes you free. The saying referred to a memo for the savings program European Union negotiators have been working on with cash-strapped Greece. The makes you free was a direct reference to a sign above concentration camps that cynically said: work makes you free.

Diplomats are concerned about the situation, though many believe most Greeks and Germans still do not speak negatively about each other. The operative word here is still, they warned.

That has not allayed tourism industry fears. “For us, such declarations are poison,” said Aililios Santis, the owner of a small hotel in a suburb of Athens.

Hotel director Christos Pilatakiss from Rhodes said, “Every year we expect about 2.5 million Germans. That’s an important income source and in these times very important,” he said. The hotelier said there are indications that bookings this year will drop by 30% compared to 2011. He said he is not aware of anti-German rhetoric in his area. “For us, the tourist is king, no matter where he comes from. We’re trying here to keep the damage under control.”