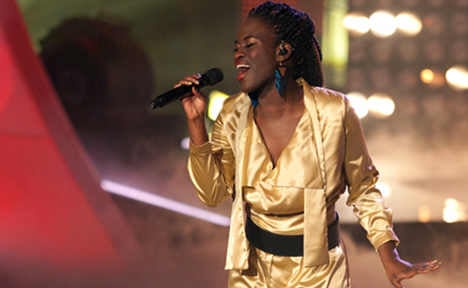 Ivy Quainoo, whose family is originally from Ghana, triumphed over American Kim Sanders, 43, who lives in Darmstadt and Max Giesinger, 23 and Michael Schulte 21.

Quainoo’s presentation of the James Bond film song “Do You Like What You See” was the most downloaded song of the evening. That plus texts and phone calls in her favor pulled her to the top spot with 33.6 percent of the vote, compared to 24.58 percent for Sanders. Schulte was third with 23.78 percent, followed by Giesinger with 17.99 percent.

The two hour show was televised live from a Berlin studio by Pro Sieben and Sat. 1. It was a hit for the TV companies as well. On average 4.2 million people tuned in to watch the competition, of which 24.4 percent were in the key 14-49 age group.

With numbers like that the production companies are already planning a second “Voice of Germany” for the autumn.