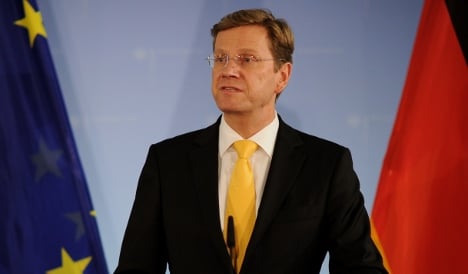 Prospects for the mission that the Arab League chief has proposed to UN leader Ban Ki-moon could depend on an Arab League foreign ministers’ meeting this weekend and the backing of the major powers.

“In addition to the establishment of a contact group of ‘friends of a democratic Syria’ we must also undertake a new attempt to resolve the crisis through the United Nations,” Westerwelle said on Thursday evening in Berlin.

He said a joint Arab League-UN observer mission and the naming of a UN special representative on the Syria conflict “would serve peace and balance.

And both would be a clear signal by the international community to the Assad regime.”

Ban said Arab League chief Nabil El-Araby had told him Tuesday that he would be sending observers back to Syria and wanted it to be a joint UN-Arab League operation. El-Araby also wanted a joint UN-League special envoy to Syria.

The UN leader said consultations would be held with the Arab League and UN Security Council members in coming days “before fleshing out the details.”

Arab League foreign ministers are to meet in Cairo on Sunday and could follow up the proposal.

Ban said international action had to be taken as he fears the violence will worsen after the Security Council failed to agree to a resolution condemning the Syria violence.

UN spokesman Martin Nesirky said the global body was awaiting more details from the Arab League. “We’ll be seeking those details and it needs to be discussed further,” he added.

It was not immediately clear whether the new proposal would need formal Security Council approval but diplomats said it could not work without the backing of the major powers.

“We are going to study it,” the US ambassador to the United Nations, Susan Rice, said, without adding any further comment.

France called the return of observers to Syria “a step in the right direction if they can freely and completely carry out their mandate.”

The observers must be able to travel freely and meet anyone they wish, said France’s foreign ministry spokesman Bernard Valero in Paris.

“Cooperation between the United Nations and the Arab League on this return must allow it (the mission) to work credibly and efficiently,” Valero said.

“As far as Morocco is concerned any initiative that could help to implement the Arab initiative, which is very comprehensive, is most welcome,” he said.

Russia and China on Saturday vetoed a Security Council resolution – proposed by Arab and European nations – which aimed to back an Arab League plan for Syria.

The League plan calls for the Syrian president to hand over powers to a deputy so new elections can be held.